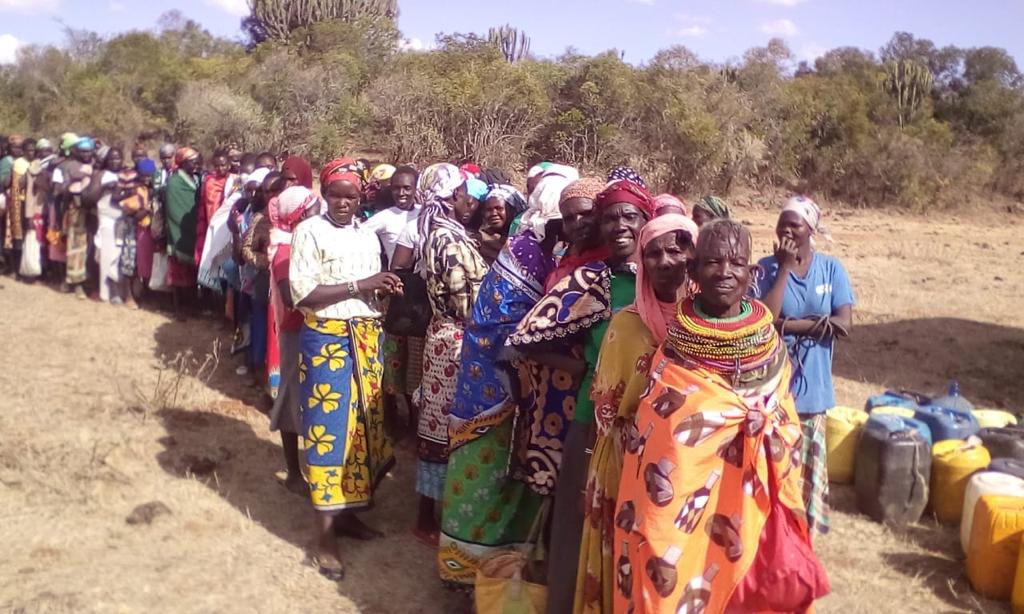 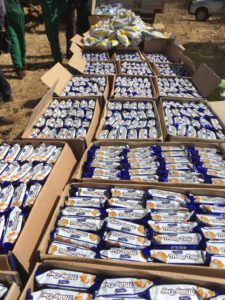 It is now over ten years since I decided to help our neighbours substantially over the stress of the long droughts and consequent food and water scarcity here in Ol Ari Nyiro, Laikipia Nature Conservancy on the Great Rift Valley of Kenya.

Much has happened since, in Kenya and all the world over.

The Climate Change brought by global warming due mostly to the loss of forest cover is no longer a definition considered far fetched and unlikely.

Year after year recurrent droughts are becoming longer and more severe, and the vital element of WATER can no longer be taken for granted.

This year 2019 another protracted drought in Kenya has resulted in another famine emergency in some arid and semi- arid parts of the country. 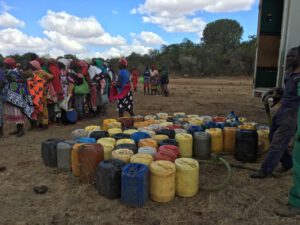 As we responded in the way that we can, and appealed to our friends to support this quest, I go back to ten years ago, and to how it all began.

What follows is an amended version of chapter 30. from my current new book – now at the editing stage.

We only have one planet. And we are all fellow passengers.

Thank you from the bottom of my heart for your support friendship and generosity.
Please feel free to contact me directly at the email here below if you wish: gmf@gallmannkenya.co.ke 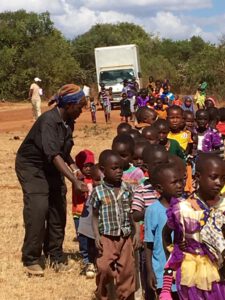 With love and gratitude 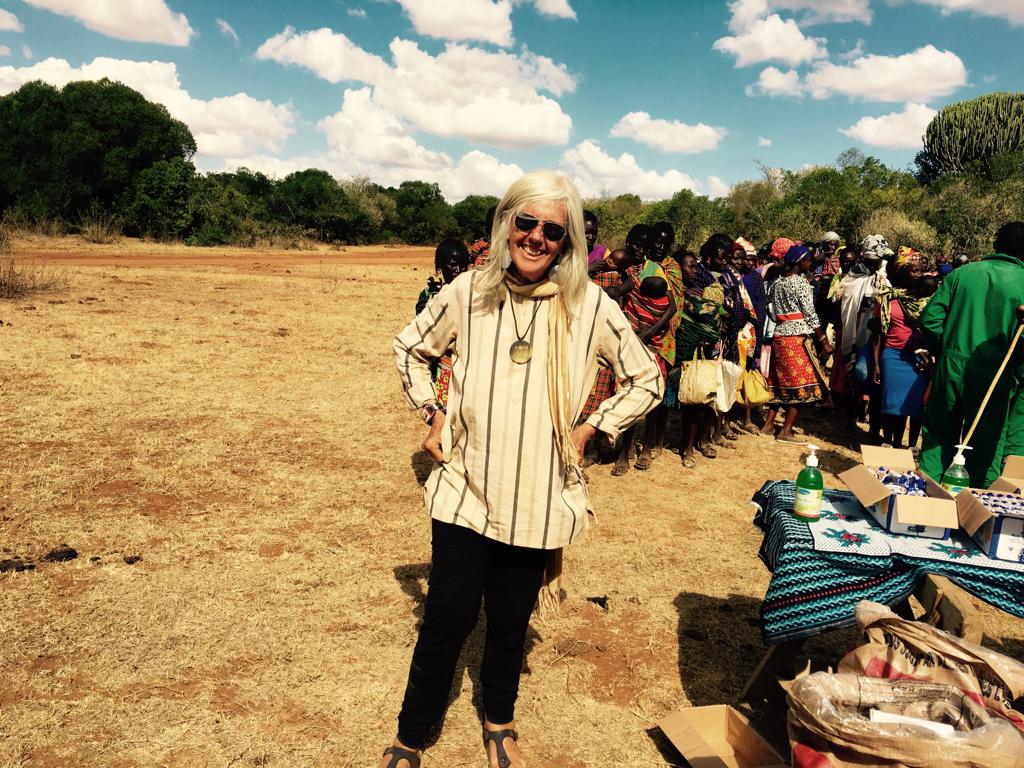 What follows is an abridged version of Chapter 30 of my current book – now at editing stage: 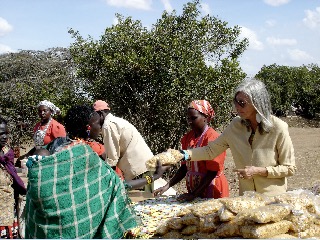 The desert shall rejoice, and blossom like a rose

“Drought: 10 millions Kenyans at risk of starvation. President Kibaki declares a famine emergency”.
The headlines in the Daily Nation and in the East African Standard announced in mid January 2009.

The photo of a skeletal old Turkana woman, bare breasts like empty purses, eyes sunken in her skull, necklaces askew, faced me from the printed page, read one morning in Nairobi, above a tray of early morning ginger tea with paw paw.

The crops had failed again in most of Kenya- the articles said-, the Government had exhausted most food reserves for such a protracted drought, and maize- the staple diet, was now practically unavailable in the country -. The price had sky rocketed.
Now a bag of maize would cost over four times the amount consumers paid last year. If they were lucky enough to find any. There were not food stock left in the Government stores.

In Nairobi this reality was hard to grasp: busy waiters in fast food joints carried trays regurgitating with fatty food. Restaurants brimmed with revellers. Imported delicacies filled the shelves of smart stores: and at the same time in the bush, children, women and elders- everyone, actually, were facing starvation.
10 millions! An holocaust! I was shattered : how could we allow children to die of hunger in 2009? What about my neighbours? I knew those children. What could I do about it? 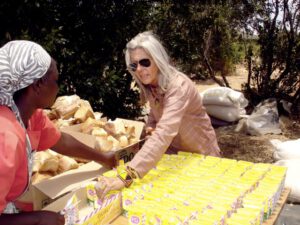 Going back now that several years have passed, I wonder how simple it was for me to
take the first step.
In her inscrutable ways, Providence was waiting.

Back in Laikipia I had an appointment to see an affluent local Kikuyu farmer, the brother of a local politician. He wanted to inspect some of our old farm machinery no longer in use, that he hoped to buy for his crops.

Short, lively, genial, his small eyes attentive to details, I always enjoyed his cunning bartering that did not allow my attention to waver and sharpened my wits.

The screeching Vervet monkeys pirouetted overhead on the Mikunduri trees showering us with leaves, the fleshy red flowers of the Flame trees were in bloom, African doves called, the Enghelesha hill framed the horizon, tall, ancient.

A table and two chairs had been laid out in the shade of the largest acacia. A thermos of tea, two mugs, a few sheets with lists of our spares and quotations.

A good morning for bargains.

We sat surveying each other across the table, like chess players before a match, ready to test our negotiating skills. Before coming to the point we spoke of work, of family, of the drought, of the grains shortage.

The farmer mentioned, grinning satisfied, that he was not affected, since he had managed to save and store away a few hundreds bags of maize from his last year crop. More than enough for milling for his needs, and to sell the surplus at a large profit.
After lengthy negotiations, we agreed on a fair price for our spares, that was substantial.

“It is a lot, mama. Too much for me. Would you accept me to pay you in shifts? A part now, the rest later?”

It happens to me on occasion that I split in two.

One of my double egos – the wise one- observes and listens to the other in silent alarm. The other Kuki is reckless and always unpredictable. With only mild surprise I now heard her saying:

“I have been thinking: I do not want your money.” He looked at me puzzled, narrowing his eyes in calculation. 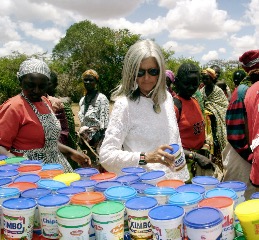 “You can get my wheat sprayer and those spares in exchange for one hundreds sacks of maize”.
At 90 Kg a sack that was 9 tons.
He shook his head, perplexed:

”And what will you do, Nyawira, with all this mahindi.” He said tentatively.” It does not keep for long. Weevils will spoil it”.

And so it was that without having planned it- in my typical style- I plunged headlong into something that was to bloom into a life – time commitment.

“Am not going to store it. I shall give it all away.” I heard myself saying. ”On Saturday. To the neighbours at the Mutaro gate. And next day at the East Pokot gate. Then Nagum. Those children have nothing to eat. I cannot allow them to waste away of hunger if I can help it. Not on my watch”.

The farmer shook again his grizzled head, bemused . His tilted eyes glittered.
He chuckled, baffled, pleased with this bargain: cash is always in short supply, and exchange of goods with goods a time- proven and respected African tradition.
I offered my hand and he was quick to shake it, to seal the bargain.

”When God calls us- he grinned, delighted – you will lead the way, Nyawira, and hold me by the hand.”

I loved bartering with him.

We looked at each other across the scattered papers and empty tea mugs, and we both had a twinkle in our eyes.

”If you want to hold me by the hand when God calls us, rafiki yangu, you better add ten bags. As your donation.”

In the end he added five – which was what I expected-, and we both already anticipated this, of course, from the beginning.

Little did I know that I had started something that was to become an ongoing new journey, one whose far- reaching results no one could yet predict.