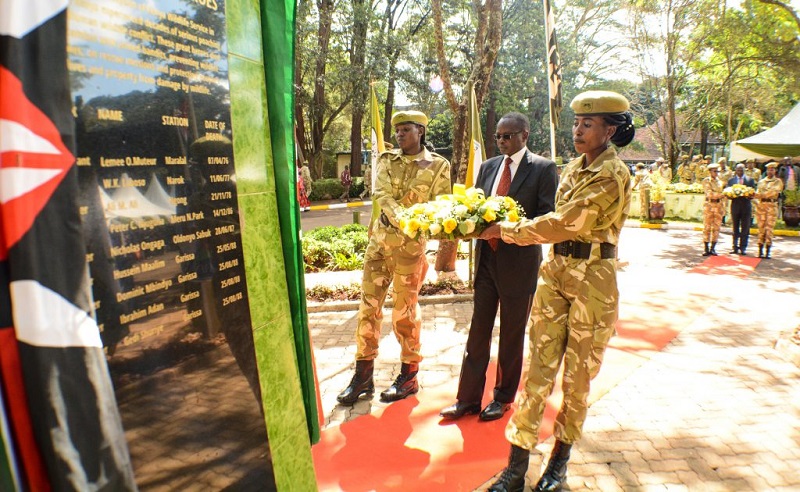 Wreaths were laid at the base of Heroes monument, with the first being laid by the CAS I.G. (Rtd) Joseph Boinnet.

Kenya Wildlife Service (KWS) 14th Annual Conservation Heroes Day was held Monday at KWS headquarters, with the Chief Administrative Secretary (CAS) in the Ministry of Tourism and Wildlife, I.G. (Rtd) Joseph Boinnet, presiding over the function on behalf of the Cabinet Secretary in the ministry Najib Balala.

Conservation Heroes Day brings together the families of KWS staff, who lost their lives in the course of duty while standing in the gap for our world-renowned wildlife. The day also sees ‘Living Heroes’ – those exceed expectations whilst performing their duties – honoured for their dedication to conservation work.

This years’ theme, “Because of you, our wildlife thrives,” is an acknowledgement of the direct contribution that Conservation Heroes make in our wildlife’s continued survival. The hashtag for the day; #PamojaForWildlife, translates to ‘Together for Wildlife.’

Addressing the crowd on behalf of the CS, Boinett thanked the Conservation Heroes, saying they were the reason for the day’s event. He paid special tribute to Ms. Kuki Gallman, in attendance, informing the gathering that she almost lost her life two years ago in the course of wildlife conservation.

Mr. Boinnet explained that the 14th edition of Conservation Heroes’ Day was honouring 73 fallen heroes. He commended the drastic reduction of poaching by over 90%, saying that elephant and rhino populations had grown to 34,000 and over 1,000, respectively. “I want to applaud KWS, the Board of Trustees, the DG, and KWS’ staff. The Ministry recognizes and values what you do,” he said.

The CAS lauded the success that Kenya registered during this years’ Conference of Parties meeting, of the Convention on International Trade in Endangered Species of wildlife flora and fauna (CITES), held in Geneva, earlier this year. The success registered during CITES – total ban on ivory trade and enlarging the number of animals listed on CITES Appendices – was the fruits of what KWS does, he said.

He commended KWS for being an invaluable member of the multi-agency force created under the auspices of President Kenyatta, for a variety of common purposes. This collaboration has seen a significant reduction in wildlife crime.

“The Service has also been instrumental in minimizing Human Wildlife Conflicts (HWC). In regards to this, I was asked by our Minister, to convey sincere condolences to the family of Mr. Simon Kipkirui Rono, who unfortunately became a victim of one of our animals that lived within Nairobi Park, but strayed out,” he said.

He said that the Ministry has taken steps to mitigate against losses arising from HWC, by setting up a taskforce, chaired by himself, which has covered significant ground, and whose report will be released soon.

Mr. Boinnet repudiated recent media reports about the dismal future of Nairobi Park, saying that much of the reporting was inaccurate. “The Ministry has great plans to improve all our National Parks and Game Reserves, whether managed by KWS or County Government,” he said. He pledged to ensure that the park’s biodiversity is maintained, as well as improving security within the park and improving the road networks (but not by tarmacking) as well as enhancing the visitor experience in the park.

KWS BoT Chair, Dr. John Waithaka, said that the Day evinced bitter-sweet emotions, because those in attendance were happy to be alive, but the reason for congregating (fallen heroes) was sad.

He said that being Chair of KWS is the most difficult job he has done since his employment as an untrained teacher, in 1979. The responsibility of ensuring the safety of all wildlife is daunting. He mentioned the challenge posed by the lions which recently encroached human settlements, which resulted into HWC. The job’s difficulty is further compounded by the added responsibility held by having the welfare of the more than 5,000 KWS staff, in hand, he said.

He lamented the inability to appreciate each and every one of the 90% of heroes in the field, noting that the Living Heroes Awards were received on behalf of those others in the field. He said KWS has the best and most committed professionals in Africa.

Dr. Waithaka challenged his fellow Board members, management and the Ministry, to come up with a feasible framework to improve KWS staffs’ lives and the welfare of their families. He said that the Board was working to address anomalies within KWS structures.

KWS Director General, Brig. (Rtd.)John Waweru, said, the ‘Conservation Hero’ can be a double-edged sword, because, on one hand, our wildlife would long since have been decimated were it not for rangers’ selfless efforts. On the other, the dark side of conservation may take several forms; death/injury; at the hands of ruthless poachers; sometimes occasioned by the very animals we are sworn to protect; or even from the vigor’s of Mother Nature – floods, dangerous terrain, and many other calamities.

“It is dis-heartening every time a name is engraved onto the Heroes’ list; in some instances, conservation seemingly reflects a zero-sum game in which saving our wildlife translates into the loss of a human life,” he said.

He explained that KWS has engraved her Conservation Heroes’ names onto a monument to salute their bravery as he thanked the family members present.

The DG appreciated the passion for the job shown by Living Heroes and encouraged them to keep trailblazing. He thanked NABU International Foundation for the continued support to the fallen heroes’ families and more so for increasing the funding through an Agreement signed recently.

The DG stated that, with reference to an earlier directive, KWS management is working on a recruitment plan which will consider members from the fallen heroes’ families who qualify for available positions in the next financial year as guided by the newly drawn Strategic Plan.

The representative of the fallen Heroes, Mrs. Samson ole Sisina, expressed gratitude to KWS and partners for the support given to the families over the years. She requested the families to be patient with regards to promises made last year regarding employment of fallen heroes’ children, into KWS.

A total of 23 Living heroes’ from both the uniformed and civilian wings, were honoured with Invaluable and Special Awards, for exceeding expectations while in the course of their duties.