The Day the Ocean Reached the Savannah / Land of Hope update 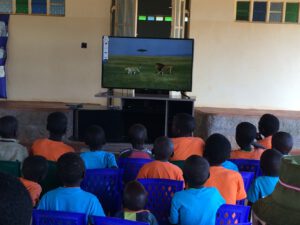 It was a festive day when Patrick Apetet – irrepressible grin of satisfaction splitting his face – arrived with a hired car, an electrician, a technician, and the largest TV screen on the market,
– complete with DVD player, and the smartest trolley on wheels-
to begin a new era at LAND of HOPE! 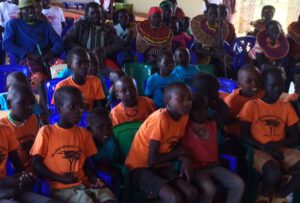 Nature documentaries from now, every Saturday at Land of Hope!!

First came the lions –
Kids besotted – and attracted by grunts and roars – adults in shuka and necklaces appeared from everywhere and soon filled the audience….

And then the underwater magic of Richard Attenborough’s Blue Planet kept everyone spellbound – including me! 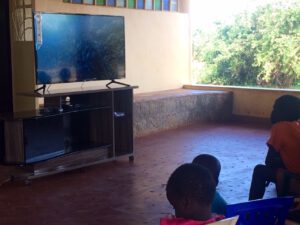 Dolphins and whales, corals and jelly fish, danced fluidly in the deep blue of endless oceans
for ones who have never seen a fish, and walk miles across parched lands to get a jerrycan of water from muddy pans shared with livestock. 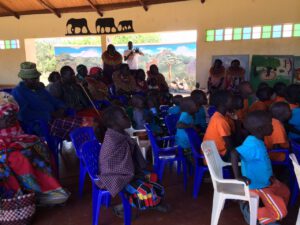 Besotted – on the tip of their chairs –
in total silence only interrupted by occasional ‘wowww!’ the Land of Hope kids and their families crowded the hall – mesmerized.

Humbled – realizing a new era of knowledge and curiosity had began, I watched it all, as overwhelmed as they were. 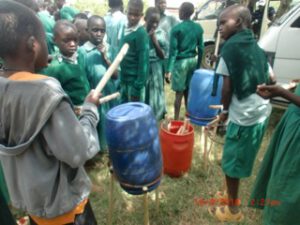 Two weeks before it had been the Jua Kali Street Drummers:
Kids from the slums of Nairobi with their social workers / teaching the village kids and off springs of pastoralists how to transmute every day garbage in unparalleled musical instruments.

Thank you dear friends for making this possible!

For the Land of Hope Community project
Laikipia West