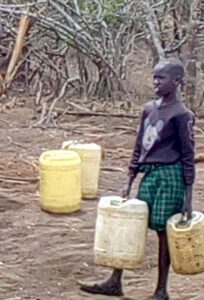 ..””We have a moral obligation to assist those who are suffering from poverty disease war and famine”

I could not guess on that morning like many, when I woke up to an already sweltering day, slid into a pair of old jeans and a cool cotton shirt to keep at bay the heat, climbed into my loaded car with Ali and the house staff, that I had began something that would continue for ever.
The sun like every day burnt unforgiving, through parched grey branches on red dust.
But there was that excitement in the air of good things to come.
I drove to Ngware gate- next to the poorest area, Mutaro – and before jumping from the car,
with a catch in my throat I took in the scene.

A crowd of urchins pressed against our gate, bare foot, covered in old rags, their dust-smeared faces split in vast grins of hunger and anticipation.
Women and elders queued with them- in their hundreds. 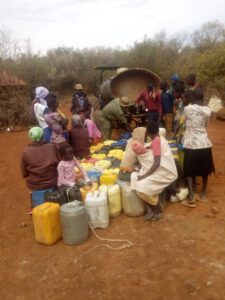 Most of our staff was already there, all the ones who could get away for the day. Only our rangers had been left in charge of the wilds.

I stood behind a long trestle table, watching the scene, with the Education Centre house girls in their red frock and zebra-striped uniform- and the men team, led by Patrick and Ali.
Rows of maize bags, delivered early morning on tractor and trailer by the old farmer I had bargained with -who had kept his word – had been set on a tarpaulin, a few already cut open. Filled measuring bowls were ready to be poured into the empty sacks that the women were asked to bring with them.

Sacks of beans and tins of fat I had purchased for good measure, and small milk cartons in rows, while piles of fried mandazi waited for the children.

I did not know quite yet- but I had that tingle of anticipation in my bones of having embarked on a journey whose end I could not anticipate- that we had began a mission we could not, would not stop. And I could not imagine, at that stage, the scope of the undertaking, and that from January 2009 to now- the protracted drought of 2019 – every week, twice and later three times a week, during the height of the dry season, our faithful team and I would stand ready behind rows of tables, that became progressively longer, fuller and loaded with more varied food as the news spread through Nairobi- and generous friends and strangers alike sent me loads of foodstuff to distribute. 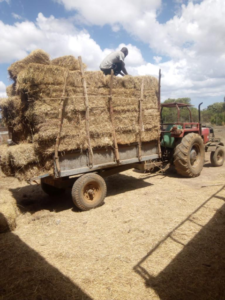 At noon of that first Saturday, in the middle of the food distribution, in fact, a battered matatu arrived unexpected, stopping in a cloud of orange dust. From it the eldest of my neighbour farmer’s sons appeared, sent by his father, with a few reporters from the vernacular Kikuyu Inhoro radio station, and the local representatives of the main national TV channels.

Caught by surprise by four microphones stuck in front of my face by four smiling young men, who all asked the same question:

“Nyawira, tell us, why are you doing this?” Wiping some flour from my nose, I replied :

“We must do what we can. These are my neighbours: we cannot stand-by watching children and women waste away with hunger if we can do something to avoid it. There is no time to waste. We should not wait for the government to intervene, we must take action ourselves, now. If you can afford to buy one kilo of flour, one litre of milk, you can buy two. Give one to the ones who have no food. If everyone did this we would overcome this problem. It is unacceptable not to do anything”.

People watched the news, and, as they do, news spread around Kenya as a bushfire. My cell phone kept ringing. Strangers asked me where they could drop food supplies. And before I knew it, loaded cars would drive to my Nairobi house, and strangers and friends alike would disembark leaving boxes and baskets of food supplies.

Trucks and canters sent by various Nairobi companies would follow. Soon milk producers, would add their gifts. Even some of the embassies, and the European Union put out collection boxes on their front offices, with the appeal. A new found friend sent a plane load of bread. 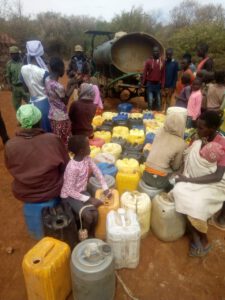 Everyone had been reading the dreadful statistics, they wanted to assist, but did not know how, where: somewhat, acting on impulse and without any specific plan, I had helped them to feel useful and part of the effort at last. There was a name, a face, a place where to drop their supplies, knowing that they would go where they were meant to go, and reach the hungry children in the bush.

I was humbled and overwhelmed by the spontaneous generosity and, more than anything, by the trust that so many strangers put in me.
By the end of 2009 we had fed over 35,000 people and we have an ongoing programme to assist as needed at time of prolonged drought now, 10 years later.

A positive atmosphere prevailed at those gatherings, women always erupted into songs and dance at the end of a feeding, and we could hear them singing as they trekked back to their homesteads loaded with food, through the dry brown hills, leaving behind their blessings for us all.

A random act of kindness had unleashed an avalanche of blessings. I watched this happen without questioning, grateful, in acceptance. 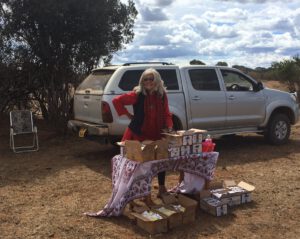 Thank you, my friends, for making all this possible

Kuki, with team
For Phylantropy