“To See a World in a Grain of Sand
and a Heaven in a Wild Flower.”
Hold Infinity in the Palm of your Hand
And Eternity in an Hour”.

I choose this significant day to share a promise of news with you.

Up the hills and down steep valleys the team climbed for over two years now since its first glimpse rewarded botanist researcher Kennedy Wambua of The National Museums of Kenya : to spy on the slow, unpredictable development of this little plant, first seen in bud, much later bearing yellow flowers… and unchanged since well over a year…

With joy and overwhelmed by Nature Mysteries.

The long journey of the little Vepris :

Currently, more 2100 different species of plants and animals are known from OAN. These include 14 amphibians (i.e. frogs and toads), 56 reptiles, 480 birds, more than 800 vascular plants, and 762 macro-invertebrates. These findings make OAN one of the richest ecological units in Kenya.

with  special thanks to our forester,  Thomas Ole Kaichu 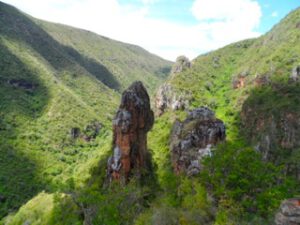