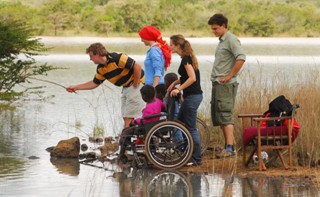 We hosted once again in our Wilderness Education Centre the group of German volunteers from Courage Africa with 60 disabled children from the Dagoretti Children home. They were able to watch elephants and go fishing from their wheelchairs. 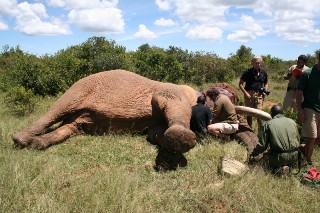 This is a two years pilot project in which three bull elephants (Ukuta, Enghelesha and Ol ari Nyiro) were identified by GMF elephant rangers as habitual fence breakers/crop raiders. They were outfitted with radio collars and GSM Development Fund mobile cell phone chips by Save the Elephants and the KWS team.The collars will allow monitoring of the elephants while an automatic sms message will be sent should these elephants approach a fence. Selected mobile phones distributed to the communities and our elephant unit will receive messages for prompt intervention. 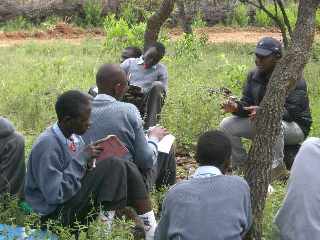 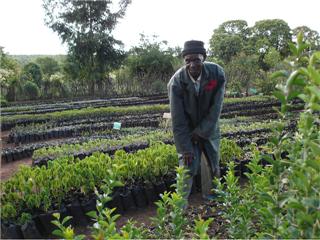 The tree nursery at Laikipia Nature Conservancy;we are committed to plant one million trees in 2007 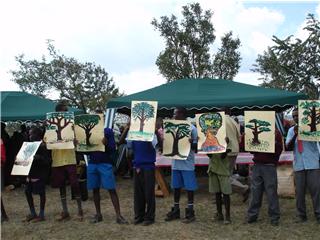 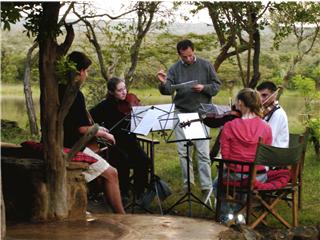 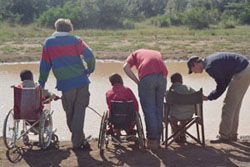 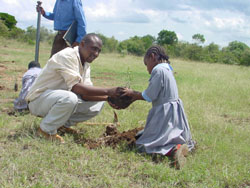 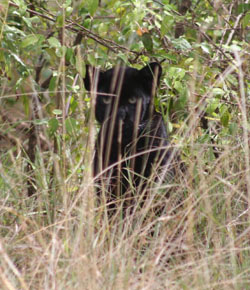 The second Melanistic leopard in a month was spotted and photographed in Laikipai nature Conservancy by Mike Roberts and Lokoro Achuka while on patrol next to our Nguare gate area, on May  1st 2007 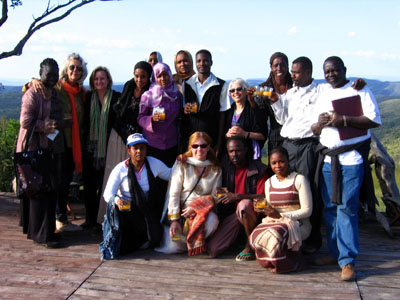 As part of our peace and reconciliation programme, we hosted a group of Sudanese youth Leaders from embattled Sudan: young people from Muslim North, Christian South and Darfur met for a magical week in Laikipia Nature Conservancy of a first ever dialogue organised by Dena Merriam of the Global Peace initiative facilitated by Jackie Wilson of the USA institute for peace. Nuns from Dharma Drum Mountain in Taiwan, were part of the group. 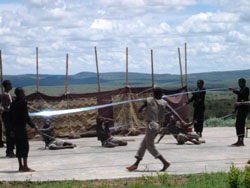 AMREF Street children artists from Dagoretti Slums were hosted a tour Wilderness Centre, performed the play Nyuma Ewani for the OlMoran Community at our Woodhenge theatre, and then- to a roaring success- for the Pokot Comunty at Churo and for the Mwenje Community at Enghelesha. 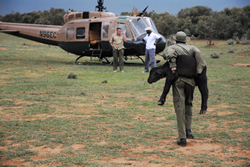 A day’s old female baby buffalo was found abandoned by the herd- the mother possibly killed – de-hydrated, starving and weak.We put her into a dry area and fed her diluted milk with dextrose and she miraculously revived; we called Ol Jogi where they have vet facilities. Alec Wieldenstein sent immediately a vet and team with his helicopter..!

Ted Waitt-who was staying at our Makena’s Hills- landed with his to see the scene… and soon the baby buffalo was rescued, in a 007 type of scene..see sequence.

Bringing Peace to Neighbours and Friends

For many years, our neighbours- the Kikuyu, Pokot, Samburu, Turkana, Njemps and Tugen communities, have been living alongside each other in a state of reasonable harmony. Through the 4 Generations we have come to know these communities well and have formed deep and lasting friendships. It was of great concern to us, therefore, when in April the Pokot and Samburu communities started fighting. A dispute that started far away has spread to involve every member of those communities who have been engaged ever since in a war of retaliation.

Cheptosai Selale, affectionately known as ‘Mama Langeta’, is an elderly Pokot herbalist with whom we have been working for over 20 years. She is now in residence at the Conservancy, with her helper and apprentice Elfina, a granddaughter to whom she passes on her encyclopaedic knowledge of plants and remedies. Mama Langeta, who is probably well into her 90s, is living testament to the potions and tonics that she concocts from indigenous plants. Every day, she takes to the bush to gather new plants and meticulously explain to Elfina their uses and preparations. We are very grateful to Carlos Loret de Mola- our volunteer from Peru, who over the last 3 months completed a database of over 100 plants used for common ailments, with comprehensive notes about their ecology and distribution.

July: a time of Building at the GMF in Kenya

In July our creativity has been in high gear, and a number of exciting and unusual building projects have been completed and others initiated. 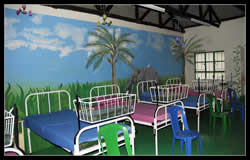 The Maternity Clinic and Health Centre donated by GMF to the Ol Moran community has been completed and furnished. The water system has been linked to the village borehole with help and labour from Ol Moran Catholic Mission. An external laundry has been constructed, plumbing completed and a separate room for storage of solar batteries for the solar system.

The Clinic is a 10 bed facility with modern medical equipment by Barfield Hospital Suppliers, and has been built at the request of the Ol Moran Community, it is the only such health centre in the region.

The clinic combines a traditional Ministry of Health approved design with fantasy and creativity. 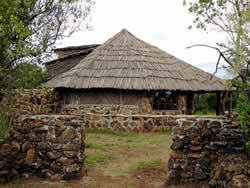 We promote the creative and sustainable use of indigenous plants and transforming the common predominant lelechwa shrub-up to now considered an invasive and useless weed- into a valuable and renewable resource through a variety of imaginative utilization is the aim.

In addition to UNDP supported lelechwa ecocharcoal, essential oils, Hidrolate, soap, droppers, we are now using this ubiquitous plant for attractive construction and decoration. A cottage made predominantly with different size of branches from the lelechwa shrub-with and without bark- and carved roots of lelechwa, has been completed and furnished at Laikipia Nature Conservancy. From the roof to the walls, from the internal panelling to the furniture and doors, the lelechwa cottage is a demonstration that everything in nature has a use. 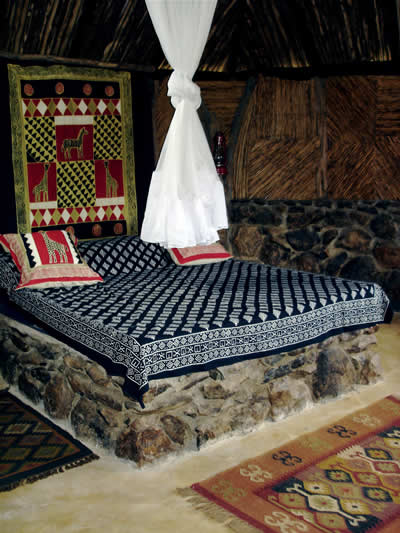 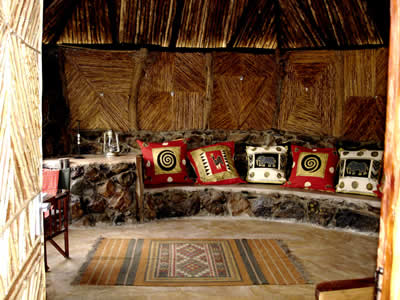